The Pros and Cons of Being a Chameleon

Fitting in is leaving you out. 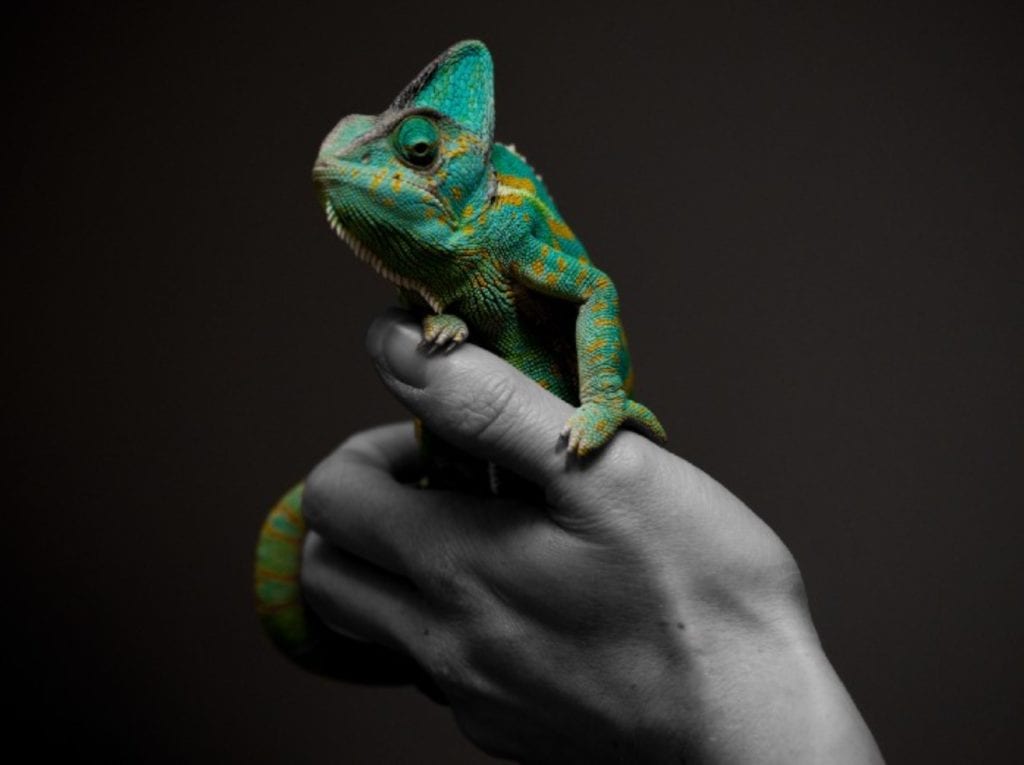 In one conversation one man’s life was changed, forever.

It was four in the morning, and I had just leapt off of a 747 airplane in the middle of the desert. Not from the air — the plane was stationed there, amidst the dust, serving as a nightclub. It had been transformed from top to wheel with lounges, DJs, and an open top level to view the sunrise from. Yes, you guessed it — I was at Burning Man.

As I stepped off of the airstair and onto the vast, flat Playa, I noticed a smaller bar with a bigger dance floor just ahead. I was intrigued.

My friends and I made our way to the dance floor, and I eventually wanted a drink. I approached the bar, and as I ordered, a British accent started talking to me from my right side. His name was Henry; alone, yet chatty, he shared his story of how he got to Burning Man. When he briefly surfaced some more difficult pieces of his story and current life situation, I mentioned that I was a professional coach. I wasn’t at the office — heck, it wasn’t even dawn — but I felt like it was relevant in the moment.

“You’re kidding,” he stared at me, blatantly. “I’m actually looking for a coach.”

Ah, life, how funny you are.

We exchanged information, and I continued on with my epic dance-capade, and my week as a Baby Burner.

Weeks later, we excitedly got on a video call to dive into, well, him. Without his Burner get-up, he had a polite, cautious, subdued energy about him. After hearing his aspirations for his career, relationships, and health, I heard something underneath all of it. He wanted something — more than anything else — that was intangible, yet so, so palpable. This seemingly muted British man wanted charisma. But just to make sure my read was accurate, I asked him a question.

“Henry, I’m sure you know that if we partnered together, all of the things you want in your career, relationships, and health would happen,” I said. “But I want to know — what have you given up on wanting? What would really blow your mind to create, that maybe you’ve deemed impossible?”

A skittish smile crossed Henry’s face. “Well, to be honest, I have a bit of a substance issue,” he admitted. “I take certain substances pretty frequently, because I party a lot. I’d like to stop that, but I don’t know how,” he said humbly.

Immediately, I suspected that this area would need some external assistance. I mentioned that, while this would come up, I wanted to dig deeper with him about it. He obliged.

“So, when you’re on one of these substances, who do you become?” I asked. “Often, we don’t like the substances themselves; we like who we get to be when we’re on them.”

Henry’s face lit up. “I become the life of the party,” he gushed. “I become open, free, and I can get along with anyone. I make friends wherever I go. I become…” he trailed off, searching for a word. “Authentic. Charismatic.”

I followed my instinct. “Hmm. So, when did you decide that it was unsafe to be yourself when you’re sober? At what age did you put ‘charismatic’ and ‘authentic’ to sleep?” I asked.

“Oh, I think I remember the exact moment it happened,” he shared, and he began telling me the story. “When I was 17, I was sent to an all-boys boarding school. I lived in a dorm with 9 other boys — 9! It was brutal. One by one, I watched a couple of the boys bully every other guy in our dorm. It was bad. Everyone got bullied, except me. I managed to remain unscathed — because I kept my mouth shut. I figured that, if I didn’t say anything about myself, they wouldn’t have any ammunition to bully me with. I just figured out how to blend in,” he explained.

Now, you can imagine what that must have been like for Henry. Living and sleeping in a confined space with boys who had the potential to make his life a living hell? Terrifying. And what do humans do when we’re terrified? We survive it — some way, some how. A new survival mechanism is born.

“Oh, so you learned to be a chameleon?” I asked.

“Well, that makes sense! ‘The Chameleon’ is a really common survival mechanism to form in our teen years, when everyone is trying to belong. Can we keep digging?” I checked in with him, and he was happy to.

“So. Let’s go back to the dorm. Usually when we create a survival mechanism — like The Chameleon — it’s because we can’t be something else, or like someone else. Like, ‘I can’t be x, like [this person], so I’ll be y instead,’” I explained. “So, what trait did you not have that you decided to become a chameleon instead?”

His dorm-room decision became clear: I can’t be powerful like the bullies, so I’ll be a chameleon.

I asked him to reflect on his life. “How much of your life could fit into the statement, ‘I can’t be powerful, so I’ll be a chameleon’?” He saw it everywhere.

And so, his party personality began to make complete sense. He was being himself, but in the only arena it would be acceptable — when he was under the influence of something that he could more or less blame his behavior on.

This revealed a common human behavior. We’re uncomfortable being vulnerable when sober, but drunk? High? We can get away with just that — we were drunk! We were high!

Henry was just trying to find a safe way to be himself, the charismatic, authentic butterfly that he truly was. And he wanted to be in an environment where he couldn’t be bullied for it.

Now, there was another side to being The Chameleon. I asked him what I must ask every client when we discover a new Coping Character: what’s the negative impact of this on your life? We automatically create these mechanisms because they produce a desired result; but what about the side effects?

This, Henry seemed to know right away as well. “My friends often complain that they don’t get to see the ‘real me.’ And at work, I’m definitely not myself. I keep quiet,” he shared.

“Right, because the ‘real you’ is unacceptable,” I guessed. He nodded. “So, you hide, until you’re safe to be you, which is while partying,” I repeated back, “and you’re left with a lack of intimacy and deep connection with the people in your life as a result. Hmm…” I was wondering something else. “What kind of women do you date? Why do your romantic relationships end?” I pried.

“I just feel like the women I date don’t get me,” Henry shrugged. A laugh snuck out of my mouth. “What?” he asked.

“Of course you feel that! You keep creating scenarios in which people can’t get you!” I laughed again. “That’s the pattern The Chameleon knows and thrives in! Let me guess — you don’t believe you can fully share yourself, so you keep to yourself, and then you feel like your girlfriend doesn’t get you, and then you resent her for not getting you, and then you go out and party, where you feel you can be yourself?” I jabbed.

“Uh, yes,” he shook his head in embarrassment, laughing. “Damn!”

“It makes perfect sense that you created that cycle, based on how your dorm situation went,” I explained. “Your brain did a brilliant job — and I’m sure being The Chameleon serves you positively in many ways, too, right?”

“Definitely. I can fit in most places with most people — I make lots of friends at multiple parties in one night!”

“Exactly! That’s why it’s been around for so long. So the trick is to get the gifts of it, and the negative impacts,” I shared.

Personally, it took me a long time to start laughing at my own mechanisms — but Henry was grasping them brilliantly and graciously out the gate.

“So, what I’m really curious about,” I went on, “is where your power went. And how you can create power now. What about you?”

“Yes. I want my power back,” Henry smiled. And so began a new chapter of his life.

Leighann Amanda
Your partner in evolving humanity and relationships. Always exploring the fullest expression of the human spirit.
Previous Post
Your Voice Matters (Your REAL Voice)
Next Post
Why Some Men Repel Women
Menu